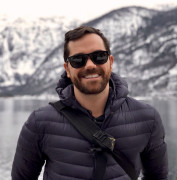 Tom is the founder and editor of Grabien. He created and produced The Peter Schiff Show and was previously the long-time executive producer of The Laura Ingraham Show, the 5th most listened to radio show in America. Before that, he served on the editorial boards of The New York Post and The New York Sun. He attended Bucknell University, where he founded the award-winning newspaper, The Counterweight. He's currently living with his three sons in Madrid, Spain. Follow him on Twitter @tomselliott